How to Talk to a Pregnant Woman 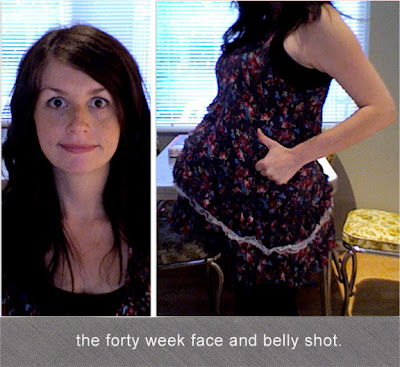 Today is my due date of our second child. Finn, our first, was 13 days late so I realize there is a chance of this one going overdue. Strangely, I don't really mind this. The one thing I don't look forward to is the questions and comments, to be quite honest. Please understand - I'm not trying to be a grouch or anything and I truly know being pregnant is a blessing. It's just that when you get the same question and comment every day, from both people you know and strangers, it gets a little wearing. Allow me to give you some tips on giving a pregnant girl, especially and overdue one, some grace:

1. Your tips on how to induce labour

There is a 100% chance that if you were to look at this mother's Google history, you would find the sentence "how to induce labour". This woman has been pregnant for the better part of a year and is very excited to meet this human growing inside. She has done her research and probably knows exactly what you're going to say: eat pineapple, drink raspberry leaf tea, go for long walks, bounce on an excersize ball, taking Evening Primrose Oil, castor oil (which can give you mad diarrhea, by the way...you're welcome) and of course the favourite; "have lots of sex". FYI, telling her to have lots of sex is just...awkward. Furthermore, these strategies and potions and whatnot don't even really work unless your body is already on its way there. Babies come when they want. Consider it the first time they exert their independence.

If we were to take a poll amongst mothers, this would probably top the charts for Most Frustrating Question Ever Asked. Obviously, if her stomach is looking like a beach ball, the baby is still living in there.

3. Asking if there are any 'signs' of labour.

Most signs of impending labour involve the words 'mucus', 'plug', 'blood', 'cervix', and 'dialation', among many. Along with these words come visuals. Unless you want amazingly personal details of the woman you are speaking to accompanied with graphic mind images, do not ask these questions.

4. Horror stories of your or your sister-in-law's cousin's BFF's awful, long labour.

This poor woman is about to embark on possibly the most painful and yet rewarding experience of her life. She knows it's not going to be rainbows and angels dabbing the sweat off her brow with organic fleece cloths made from the baby lambs of heaven. If she asks, then it's fair game, but don't volunteer bad experiences. Imagine the horror on someone's face when you tell them your friend's anestesia never did kick in, just before they go in to get their appendix removed. Oh, but good luck! Same face. Same horror.

5. Commenting on how huge she looks.

Or if she is 'sure' she is not carrying twins. Seriously. Not funny. Someone asked me this when I was pregnant and overdue with Finn in late summer with swollen face and feet, cankles, and the whole shebang. I was polite, but no smiles or courtesy laugh from this one. This is even worse if she is actually carrying twins.

6. Saying they are forfeiting their current amazing, exhilarating, freedom-filled lives.

Telling someone that they are inevitably giving up their "freedom" for the rest of their life is not only untrue, but incredibly mean! Parenthood should not be seen as a jail sentence. It's the greatest privilege ever. Yes, life is drastically different when you have someone depending on you 24/7, but seeing it as a subject of woe is lame. Having babies is some people's ultimate dream and telling them that their dream (and their child!) is going to ruin their life is bad form. And untrue. And just...mean.

7. "Get all the sleep you can now because you will NEVER SLEEP EVER AGAIN!"

Also NOT TRUE! This is one of the most popular things pregnant girls are told. Let it be known, mothers do get to sleep again at some point. For some, it's longer than others, but it does happen. Eventually.


On the flip side, there are some things that people can do to make the pregnant lady feel like a normal human being and put her at ease.


Green Light Subjects for Talking to a Pregnant Woman


1. Tell her she looks great, especially when she doesn't feel it.

Pregnant women do not typically feel like they look amazing. Huge stomach, swollen everything, pains and zings coming from random nerve endings you never knew you had and waddling like a penguin doesn't feel awesome. They may look cute with the belly, but rarely do they feel beautiful or great. (I don't speak for everyone, of course, but I kind of assume...correct me if I'm wrong) A little compliment can go a long way!

2. Talk about at least one other subject before bringing up her pregnancy.

3.  Encourage her that the birth process will be okay.

If the subject comes up, just say it's all going to be okay and she'll do great, no matter what happens. As said above, no horror stories. Everyone's birth story is different and most turn out well in the end. They're full of pain, tears, sometimes complications, but if you ask any mother she will tell you it was the greatest, empowering, most joyous day of her whole life. The best things in life often take loads of work, some pain, and some tears.

4. Tell her you're praying or will pray for her! (And really do it)

She appreciates all the help and prayers she can get. Prayer goes a long way people!

There you have it. I had to get that off my chest. I hope it didn't come off too cynical or stuck up...I didn't mean to. Can I use pregnancy as an excuse? One last time? (Hopefully)